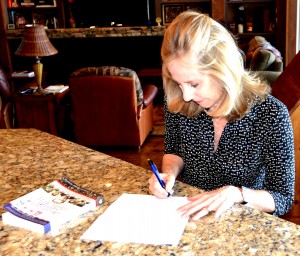 Joanie Holzer Schirm signing Prague’s Triton publishing company contract for Adventurers Against Their Will to be in Czech language. March 2014

As I held my pen to sign this Triton publishing agreement, words from my 1992 Walt Disney World Dreamers and Doers Award came to mind:

Somehow I can’t believe there are any heights that can’t be scaled by someone who knows the secret of making dreams come true. This special criteria, it seems to me, can be summarized in Four C’s. They are curiosity, confidence, courage, and constancy…and the greatest of these is confidence. When you believe a thing, believe it all the way, implicitly and unquestionably – Walt Disney

Unquestionably, my father’s life story and the contents of his treasure trove of WWII letters are a hymn without sentimentality to the magnificence of the human spirit.  The evergreen lessons they relay about protecting human dignity are meant to be heard across the globe. From English, to Czech, to who-knows-where next – we must keep and preserve all that is known in trust for those who come after us.

The small beginnings of this story began some seventy-five years ago when my father was displaced in 1939 from his Nazi-occupied Czech homeland to China. There, he sat at various desks in Shanghai, Tsingtao (Qingdao), Tientsin (Tianjin), Ping Ting Hsien (Pingding County), and Peking (Beijing), writing letters to his friends and family about what was happening to him. On occasion, surrounded by raging typhus epidemics, he observed bloody battles between Chinese and Japanese armies. Next, he found himself in the midst of cultured conversations at the finest hospital in the Orient. As a physician serving Chinese patients, he worried about his own family and friends who were trapped behind in Nazi-territory or displaced like he somewhere in the war-torn world. His gripping experiences throughout China seemed endless.

Somehow in the midst of turmoil, he saved 400 letters from 78 friends and relatives. He kept them safe to store away after the war – only to be discovered upon his death. So now it seems fitting that Adventurers Against Their Will, about seven of his correspondents and the magnificence of the human spirit, would be published in my dad’s native tongue.  Sometime in 2015, Triton Publishing company of Prague will display the results of this foreign rights agreement to produce the book in Czech.

A special thank you goes to Prague’s Jana Gigov and Lenka Svobodova for elucidating what I’ve written in English to make this Czech-language publishing dream come true.  Na zdraví!

And to all you writers who wish to have your book reach a global market… this serves as a reminder to pay homage to Walt’s secret “Four C’s.”  Big dreams can come true!