Today is my mom’s birthday- February 7.  If she were still alive, she’d be two years from turning 100. She ranks up there high as one of the best moms ever; also one of the most unique moms among my Florida childhood friends as she was born in China.  Although there are several billion people who’ve over the years been able to say they were born in China, I always felt by virtue of her story, I got to be a little more special. Thanks Mom.

Ruth Alice Lequear was born in 1916 in Hunan Province. Her parents were American missionaries who married there in 1913. Her father, Horace Roberson Lequear, went to China in 1906 for the First German Reformed Church of Doylestown, Pennsylvania. From the time he arrived until 1914 he served as an English, Math, and Physics teacher at Lakeside Schools in Huping near Yochow City. Huping is located on the beautiful Dongding lake shore, known to my mother then as Tung Ting. Horace next taught at Huping College and later became a Church Famine Relief Administrator until 1926.   The school still exists as does the school chapel that Horace lovingly designed.

Her mother, Emma Martha Kroeger, arrived at the missionary field in 1911. She was a German-immigrant-turned-Ohio nurse who heard the Protestant missionary calling to go China said quietly in her heart three times.  At least that is how she described it to me as a child.  Nurse Emma served in the Yochow (now Yoyang) hospital. Horace and Emma’s loving union produced four children, all but one born in China. Horace went on to be a pastor at St. Paul’s Reformed Church in McConnellsburg, Pennsylvania. Later, he and Emma lived with our family in Indialantic, Florida until their deaths.

You may wonder why I’m writing more about my grandparents than my mother as we celebrate Mom’s life today. Well, it’s because she was so proud of her parents and her life in China. “They shaped me,” she’d often say.  In 1984, Dad, Mom, and her brother Hank returned to China with a Lindblad Travel group for a weeklong trip through the Yangtze (Changjiang) Gorges which included a side trip to her old grounds. Though the place names had changed, she was able to visit where she’d lived long before.  This is from her Christmas letter that year:

“Word that we were on the board the Lindblad Goddess spread through the river towns like wild-fire. A New York Times feature writer, Barbara Goldsmith, who had been sent (accompanied by a professional photographer) to write a “sailing the Yangtze Gorges” article for the Travel section was on board. Our quest fired her fancy, so our story will be featured in the near future. My 10-year-old child memories of the language and the old place names enabled us to find our mother’s hospital. We found Dad’s boys’ school in Huping. We passed landmarks that I could name in Chinese to the delight of the driver and guides. The school now enrolls 100 young men, who learn to business manage communes.   We stood in the house where Hank and I were born, beside a 70+ year old, still used, paved tennis court.  I identified the house as my details were indisputable though the guide tried to lead me to the wrong house. It was touching, a memorable episode, and worth the whole, long trip.”

The New York Times article by Barbara Goldsmith titled “7 Days on the Yangtze” appeared in November 1984. It included three long paragraphs about my mom’s visit, a piece of which follows:

“When it comes to concern for family history, however there is complete understanding. Among our group are Ruth Alice (Chick) Holzer from Melbourne, Florida and her brother, Henry (Hank) Lequear, a dentist from Orlando.  …By the time we reach Lake Dongting, word has somehow preceded us down the river. There, local officials greet Chick and Hank and accompanied by {guide} Sun Hanxin, they pile into an ancient, robins-egg-blue limousine. Within hours they have located their father’s mission near Yueyang – Yueyang and Yochow it turns out are one and the same, but the name change occurred more than 70 years ago…The hospital started by their mother, is in virtually the same condition it had been in 1926.” 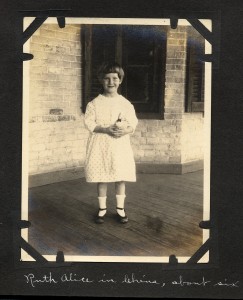