April is an important month for me.

My daughter Kelly was born in April 1970.

April 1942: my grandfather Arnost wrote the last letter he would ever write to my dad. My father received it in Ecuador three years later. He saved it when he moved to Florida after WWII; he just didn’t tell his kids he had it.  My dad suspected his parents perished in the Holocaust even before Arnost’s letter arrived to him.

In April 2008, I discovered the powerful letter in an old desk my dad made the year I was born. That April, I had the letter translated – 66 years after my grandfather wrote it. What it said allowed me to step forward in a breathtaking leap in to my father’s past. Its message for humanity is the inspiration of my book series.

April 2009: I traveled with my husband Roger through unexpected places of the Czech Republic, Slovakia, and Poland. I sought information about my father, his family and friends’ lost world. I hunted for documents, landmarks, and other places that could bring to life my dad’s history. I trembled when I visited the place where the Nazis took my grandparents’ lives in April 1942. I felt my own identity shatter and shift. At a Czech family reunion, among the branches of my own roots, I found much more than I’d ever dreamed.

April 2013: my debut nonfiction book, Adventurers Against Their Will, was published. Based on my personal quest to uncover a past portrayed vividly in a secret WWII letter collection, the story offers a window in to the lives of my father and seven of his Czech friends before and after Nazi occupation. To my joy and amazement, it won the 2013 Global Ebook Award for Best Biography.

Now in April 2014:  I’ve just received the printer’s proof of my second book: My Dear Boy: The Discovery of a Lifetime.  I’m not sure how and who will publish this two part memoir, my dad and mine, written 70 years apart – but after six years, as I hold a ‘mock-up’ in my hand, I feel the good fortune of a writer’s life.  I know I can’t change what is past but I can change the future. It’s what my grandfather wished for and I won’t let him down. 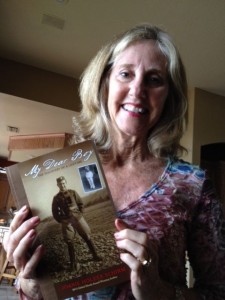