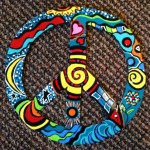 November 11 – yesterday marked the 95th anniversary of the signing of the armistice ending World War I.  You remember the much repeated phrase “The war to end all wars”?  It originated from British author and social commentator H.G. Wells’ book titled “The War That Will End War.”

Later, the words were used by U.S. President Woodrow Wilson along with “to make the world safe for democracy.”  Wilson believed that America’s entry into the war was necessary to preserve human freedom. Henceforth in search of this elusive “lasting peace,” this quest remains the linchpin for entering many wars. Sadly, war has not succeeded in ending war but courageous men and women everywhere continue to try.

Yesterday in America also was about honoring those who tried -the Veterans of all wars.

In the name of freedom – with respect for human rights and dignity – may today start our march toward lasting peace for humanity.