“The life, my dear friend, is the art of meeting people.”

“The life, my dear friend, is the art of meeting people.”

A wonderful event just occurred. Czech words from seventy years ago were read aloud in my writing room. It happened because I read a fortuitous article in the Orlando Sentinel newspaper reporting that the Rotary Club in our College Park neighborhood was about to host a Group Study Exchange (GSE) with Czechs and Slovaks visiting Central Florida as guests of local Rotarians. As an international organization of business and professional leaders, Rotarians are well known for coming together to create positive, lasting change in their communities and the world. For over 100 years, their shared global passion for service has helped them accomplish remarkable things.

I tracked down Rotarian contact Pam Potenza and told her of a treasure trove of 400 WWII letters written by seventy-eight (mostly Czech) writers that are housed under my safekeeping just down the street from where the Rotary holds their meetings at the Tap Room Restaurant at Dubsdread. Beginning in mid-1939, the letter writers corresponded with my Czech dad as he traversed the earth through five continents after escaping his Nazi-occupied homeland. While he found refuge in China for a year and half, he wrote and received amazing letters from friends and relatives that draw you in with intimate details of everyday life that create a vivid picture of the larger  ramifications of the catastrophe of war.

In the autumn of 1940 in Peking (Beijing), China, he met and fell instantly in love with my mom, born in China of American missionaries. Forced during the war to travel the world looking for a safe home, they finally settled in Melbourne, Florida where my father served as a compassionate family doctor.  Discovered in old Chinese boxes after my parents died in 2000, I had the letters translated in 2008.  I knew the Rotary’s Czech and Slovak delegation would find them interesting. After all, they involve real Czechoslovak people pouring their hearts out from wherever they were during WWII – Great Britain, France, China, Czech-occupied lands, Palestine, Sweden, Ecuador, and America.  Their words describe the circumstances they found themselves – against their will and beyond their control.

There were a few watershed events that led to my father’s successful escape from the Nazis. One included a representative in 1939 of the Bata Company, a prosperous Czechoslovak shoe manufacturing company with 100,000 worldwide employees. He provided my father a letter stating that he was employed by the Bata Company in their Singapore office. He was not. My dad had, however, worked for Bata one summer while attending Prague’s Charles University medical school. The Bata letter was provided with full knowledge why my dad desperately needed it and of the danger it held for Bata Company if discovered by the Nazis that they had collaborated.

Without that important document, my father would not have been able to complete his Nazi-required emigration papers. He would have been trapped and because of his Jewish heritage, most likely perished with his parents and forty-two other relatives lost in the Holocaust.

On October 18, 2013, the Rotary study group of five young professionals – four women and one man -entered my home writing room where I have produced two nonfiction books about the history and revelations that the letters detail. Judged by 200 worldwide experts, my debut book Adventurers Against Their Will won the 2013 Global Ebook Award for nonfiction Biography, an honor I quickly shared with the group. The second book, My Dear Boy: The Discovery of a Lifetime will soon be published.

Each of the GSE visitors is very accomplished in their own field.  From the Czech Republic, Martina Dlabajova of Seven Partners s.r.o, is Chairman of the Board of the Zlin Region Chamber of Commerce. When she told me this, I felt a surge of emotion. Zlin is best known as the industrial headquarters of Bata Company, which played that key role in my father’s survival on earth.

Adriana Antoskova works as a city editor with the News Agency of the Slovak Republic (an area where my father served in the Czechoslovak army in 1938); Jan Bohdal is an IT and media specialist in beautiful Cesky Krumlov, CZ; Klaudia Gregusova has a bachelor of law and is a presenter and director of a regional television in Slovakia; and Olga Spatova is an award-winning cinematographer and director in Czech Republic.  For an hour and half the group was able to look over the collection of old letters, documents, and photos and to see and feel the history of a world in chaos.
In the writing room, with overflowing boxes of letters available for review, Martina read aloud in Czech a few of the letters. Her words once again endowed them with life. With cameras in hand, the others captured the remnants of the lost world which held their own heritage frozen in time.  Each described how important they felt it was to learn of this important history and how it relates to our world today. When we know about our past, we can create a better future.

Regardless of heritage, the letters hold lessons for humanity about the importance of protecting human rights and dignity – and thus ensuring peace.  As I thought about Rotary as one of the largest and most influential international humanitarian service organizations in the world, I knew the voices from seventy years ago would help their mission to promote peace and international understanding though educational exchanges. You never know where in the world you will find a treasure. You must be open to the chance and learn from it.

Soon after the group departed, I received this heartwarming email message from Martina Dlabajova:

You were such a surprise for us today; we still cannot express all our feelings. It was a great meeting and I think we will have a lot of things we want to share with you more in the future and from my side just be sure that I will wait for you in Zlin!

One of my Italian friends always says: The life, my dear friend, is the art of meeting people.

I am happy we met today. 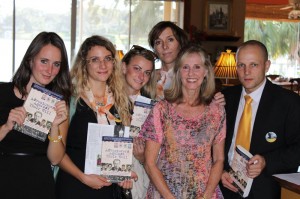