In a world where caring for our one human family matters more than ever, Gordon Patterson, Florida Institute of Technology History Professor, captures the spirit of my dad’s meaningful life in a short article written for the Florida Tech “Secret Histories” series:   The O. A. Holzer Medical Center.

Driven by his father’s last wish that “your profession of curing doesn’t just become a source of wealth for you, that you yourself become a benefactor to the suffering humanity,” Dad walked that walk in his service to Florida Tech and the community at large.

The world has changed momentously in the 80 years since my father was driven from his Czech homeland, followed by the loss of forty-four relatives in the Holocaust, including his parents. Social fragmentation may be part of what has caused a rise in hate, antisemitism, and extremism.  But the core value of taking responsibility to care for one another remains a simple remedy to complex questions that face us daily across the globe.  Do unto others…

Learn from the past. Build a better future. 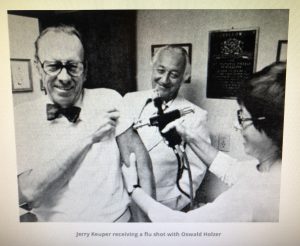