Kindness is not an action most expect.

My writing journey never disappoints—often reminding me of the kindhearted strangers who’ve entered my life when I just let them in.

In 2018, I connected with a Chinese born gentleman, Jim Fang, now a Canadian citizen, who is planning a Toronto museum dedicated to previous Christian missionary work in China. Jim was born in Yochow (now Yueyang) 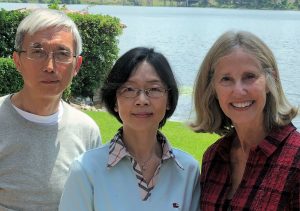 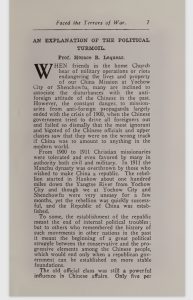 , Hunan Province, where one of the oldest American missions was established. During his research, Jim uncovered he was born in the same place as my mother, Ruth Alice (nee Lequear) Holzer was born in 1916.

By the time I met Jim, for several years he’d been buying memorabilia to fill his museum from across the global internet.  After a Google search, locating my author website, Jim contacted me via email saying his collection may include stories and photos of my maternal grandfather, Horace Lequear. He offered to email copies of the materials, and sure enough, with goosebumps erupting on my arm, I saw my grandfather’s face in the photos. Soon, I was reading my grandfather’s words describing his mission work and the people he worked with from 1906-1926 in the mission fields.

Shortly after, Jim and his wife visited our home, where we discussed information of common interest. We’ve corresponded ever since, including a note this week showing his kind soul.

Dear Joanie, I am so glad to hear the publishing of your new book about your father. Congratulations! In June, I saw a letter of 1941 for sale. It was sent to Mr. & Mrs. Leo Lilling in Shanghai. When I searched more information about Leo Lilling, I found that he was mentioned in your earlier book (https://joanieschirm.com/honoring-un-world-refugee-day-june-20th-74-years-hence-my-dads-journey-as-a-refugee/). So, I bought the letter although I could not read the letter – it is in German. The letter was from A. Stern in Seattle, Wash., sent to Leo but was returned to the sender due to service suspended because of the war. I am attaching the letter here and hope it is useful for you in some way.

Now, I’m in search of a German translator as I hope to learn more about Leo Lilling’s life after he and my father went separate ways in early 1941.  My dad sailed from Shanghai to Los Angeles with my Mom.  Leo stayed behind, hoping to keep his prosperous export business intact. After Pearl Harbour brought America into WWII, I suspect that was no longer the case, and I wonder if the letters will shed any light on Leo’s situation just before the outbreak of war.

As for me and my writing journey-learned advice:  Always remember. In today’s world, kindness is not an action most expect. The world becomes a kinder place when you’re kind.