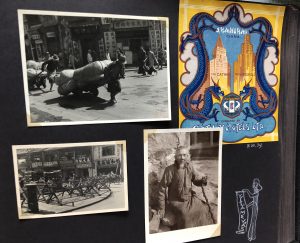 After escaping Hitler’s growing threat in his occupied Czech homeland, and traveling nearly 10,000 nautical miles from Marseille, France, Oswald “Valdik” Holzer, on July 5, 1939, reached Shanghai.  My father was a 28-year-old physician in a very foreign land.

During 1937-1941, some twenty thousand desperate European Jewish refugees arrived in Shanghai.  While traveling the globe as an author for research and speaking engagements, I’ve learned this illustrious Shanghai history is well known among Holocaust scholars but little known to others.

Echoing the immigration turmoil of today’s world, during the late 1920s and 1930s, in the shadow of a global economic depression and the threat of war, many countries, including the United States of America, refused to increase their visa quota numbers. According to the Simon Wiesenthal Center on Holocaust Studies, Shanghai took in more Jewish refugees than Australia, Canada, India, New Zealand, and South Africa combined. This little known truth makes “Shanghai” synonymous with “haven” and “rescue” in the narrative of the Holocaust era.

On this 80th anniversary of my father’s arrival in Shanghai as a Czech Jewish refugee, I share my dad’s eyewitness account via a letter he wrote (preserved with a carbon copy), to a close friend, Frantisek Schoenbaum, trapped with his wife Andula and young son Honza (John), in Prague under Nazi-control. The letter from the Holzer Collection was translated in 2008.

Franta, don’t be angry with me that I am bothering you, I have had no news from home for a month already. Please call my family and tell them to write to me airmail at Hong Kong POB 370 c/o Leo Lilling as that is my address. If something would happen, God forbid, with the family, write it to me, please, so that I can possibly help them somehow if it would be possible.

I am also including a letter for {Pavel} Koerper. He wants to come here, so I must work him up a little so that he would not be surprised. If some of you are in a lousy way perhaps, come here, it is better here, despite all that misery, than in Prague or in Europe in general. Notably, one can work here, and I will be already sitting {meaning probably in a place with medical practice} by that time so I could help you. Eventually, one would not stay here forever, and a man can get to some other place somewhat easier from here.

Thank you for your lovely letter.   In the meantime, you received undoubtedly my chattering from the ship.   We must stay in writing contact all the time.   You have no idea how happy you made me with that letter of yours.  You know, when a man does not hear that dialect of ours anymore, at least one can have something for enjoyable reading again.   To tell you the truth: that distance is not so big, and it does not seem so huge, but I am damnably homesick for all and for everything, mainly when a man is almost entirely without news and when he does not know when, and if at all, he will return. Such thoughts would develop in your head only after some time.   Do not be angry that I am responding to your cheerful letter with such sentimental jabbering, but it is called here “S’ai depression,” and supposedly everybody is going through that during their first time.  After all, you know that is not my nature.

I hope that in your literary ass {meaning: forgotten area, away from the center of action}, you will also mention the good physician Osvald who left his mother country to treat poor little Chinese.  In order for you to elaborate on this topic better, I am sending you the following contribution:

So already for three days, I have been partially pummeled with malaria. I caught it someplace in Saigon, such an idiotic French Indochina, but it is better than tuberculosis.   Hey, one must always be content.   I am curing it by myself, chiefly with whiskey, which is dreadfully cheap here (1 liter 7.-Kc [crowns]).   Otherwise, it is possible to catch in this beautiful but strange country everything from measles to leprosy.   Hey, so that I won’t forget, if you happen by any chance to talk with my family, do not tell them anything about these lovely things, they would be unnecessarily afraid.  It is not so bad.

As you had read “Chuan in China,” approximately 20% of it describes things well; otherwise, everything is yet crazier by far.   In a week here, you set aside all European social prejudices, you let yourself ride in a rickshaw, you are cursing Chinese, in Czech of course, you start to booze.   In short, you become a white shadow; it is somehow a matter-of-course situation.

Franta, there are 20,000 emigrants here, 98 % of them without money, so the society gave them housing in a quarter almost entirely destroyed by Japanese shooting, from where the Chinese fled.   And those Jews, Israelis, etc., built from those ruins their houses, opened businesses, coffee houses, even Jewish prostitutes are there.   But of course, who will guarantee them that the bombing of the area would not start tomorrow again?    Those who do not believe in that place and have a little money, live in the French Concession, it is first of all safe.   Like in a circus created for adventurers, you can make so much money here in a day that you don’t need to do anything else in life ever, and in an hour, you can have all of that go into a toilet.   The dollar dropped yesterday, and today by 30 %, that has been talked about here for a week already, so some people became wealthy, and others lost their shirts in the process.   Even the weather is so crazy:  I get out nicely in the morning in a white suit, with a towel around my neck as is a fashion here to have something for wiping when one is sweating like a pig, I sat on a bus and started moving.

However, a typhoon came in the meantime, and I had to get off the bus only with extreme difficulty, then I was running down the street until I exquisitely fell.   For a while, I was rolling in mud, and when I looked around then, I found out that numerous gentlemen are lying there in the same manner and that they have a good time looking at the mess.   So I had a good time, too.   Once in a while, some gentleman crawled over me with the necessary…” sorry.”  Oh, but all of a sudden, there was a loud sound beside me, a roof fell there.  I don’t know where because surrounding houses had none already anyway.   Under the roof, there were lying some rickshaws and an overturned car.    Therefore, I told myself again: safety first, and I slithered with the crowd into a nearest passage-way, where I waited for six hours till it was over.   One cannot distinguish now what was destroyed by Japanese and what by the typhoon.

For me, as a physician, there are some possibilities here.   I have some acquaintances here, and I feel that I would not get lost here.   However, I would not like to stay here as I lack some such feeling of home.  When I make some money here, I will rush farther inland immediately.   Otherwise, one can manage to live beautifully here, for 77 pounds a week, you are a big gentleman.  You can furnish a luxurious apartment for 5 pounds, and for 1 shai. Dollar, you can have a beautiful Miss for a week with everything.  And yet, I envy you those strolls along the river Luznice when there is a sweet fragrance of hay near us…

P.S. Write on airmail paper, you naive man, who are you paying the postage?

©2008 From the collection of Joanie Holzer Schirm.  Reproduction only with permission from Joanie Schirm: joanie@joanieschirm.com 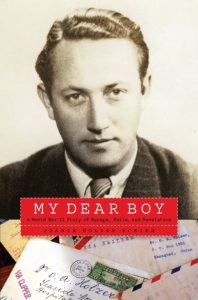 Dad’s story in MY DEAR BOY came to life via revelations from a treasure trove of four hundred letters he preserved after the war. Seventy-eight friends and relatives, along with Dad’s own seventy carbon-copied letters and journals written during his 19 months in China, detail the emotions, circumstances, and revelations encountered by displaced persons along with those trapped behind under Nazi-occupation. Former USHMM archives director, Henry Mayer, called the Holzer Collection “one of the most complete personal collections of WWII correspondence seen in years.”

The timeless letters remind what it’s like to be forced penniless from home, losing native land, family, friends, possessions, livelihood, and identity.  I exist because my father made it to China. My paternal grandparents, Arnost and Olga, and forty-two other relatives were not so fortunate. All hope-filled futures were lost as they perished in the Holocaust. Dad’s only tangible connection to his lost world were these old letters.  He hid them away in old Chinese boxes, moved to America and served as a family physician in Melbourne, Florida. The letters were discovered after his death and in 2008. Upon translation, they revealed a universal, timeless story relevant to today’s world.

Now showing at the Holocaust Memorial Resource and Education  Center of Florida:
DISPLACED PERSON: Oswald Valdik Holzer’s story with audio, featuring WWII letters, documents, photographs, vintage film, and clothing currently on exhibit. Upon the 2023 opening of Orlando’s new museum —Holocaust Museum for Hope & Humanity—the DISPLACED PERSON exhibit will become a permanent reminder of the ongoing struggles of displaced humanity throughout our world and what together we can do to diminish this plight.