It would seem to most that the United Nations-sanctioned International Holocaust Remembrance Day on January 27 and Chinese New Year this January 31st would have little to do with one another. And yet during my father’s life, and now in my own daily writing, they hold a key to a common cause for humanity.

Over the past six years as I’ve uncovered my father Oswald Holzer’s lost past within a treasure trove of his WWII letters, I’ve reconstructed aspects of the daily lives of Czech family and friends as they dealt with an unfolding Holocaust they did not foresee. These magnificent primary sources, written by seventy-eight people, tell of a storied Czech past suddenly engulfed with Nazi hate. They detail Nazi intolerance for those of different ethnic origins, religious or political beliefs, or physical and mental infirmities. The genocide that followed the hate included forty-four of my relatives. Among them were my paternal grandparents, Arnost and Olga Holzer, and great-grandmother Marie (nee Porges) Holzer.

So how does this story relate to Chinese New Year? What most people don’t know is that from 1938 to 1941, Shanghai, China became a haven for some 20,000 threatened European Jews who made their way to Shanghai’s free seaport to escape Nazi-persecution. In Shanghai in1939 when my dad arrived, there was no Chinese government. The Japanese had ousted the Nationalist government in 1937, so there was no authority at the seaport to exercise passport control or immigration. As a result, for a short period, anyone could land without having to show entry papers.

For my young Jewish father in this far away world, he emerged from the darkness of his Nazi-occupied Czech lands into this far east land of light, engaged in its own turmoil of Chinese versus Japanese soldiers fighting for control. When Dad arrived, he had no idea of the destruction that lay ahead back home for family and friends.

Trying to fit in, Dad embraced the Chinese culture, learned the language, and as a physician cared for their sick. In Peking (Beijing) in September 1940, he met and fell instantly in love with my American missionary mother, Ruth Alice Lequear. They quickly married and eventually found permanent refuge in Florida where they lived out their sixty year love affair. In recognition of the hope and inspiration it provides, my parents always celebrated Chinese New Year.

The UN resolution which established International Holocaust Remembrance Day urges every member nation to honor the memory of Holocaust victims. On January 27, I will read aloud the forty-four names of family members who perished. The personal register I will read from I call “Valdik’s List” as my dad typed it in 1993 when the movie Schindler’s List premiered. It was only then that my brother, sister, and I knew the extent of loss in our own family.

And soon after this important day of remembrance, I will turn my attention to how Chinese New Year, known as the spring festival, reminds us to cherish life through its colorful activities and hopes for the advent of spring.

Celebrating life should always be accompanied by remembrance of the people, places, and events that define our past. It is essential if we are to learn lessons from the past. Without this memory and continuity, we will have no sense of purpose to support our common cause for humanity to bring about a better, more peaceful, future for all. 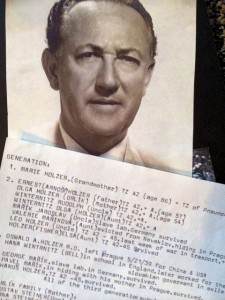