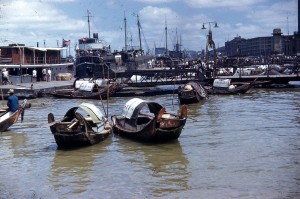 It is always nice to hear from my book readers…especially if they add new information!  Just received interesting email from an Adventurers Against Their Will reader, Judith Lavitt.  Born in Shanghai in 1941, now living in Canada, Judith’s email (shown below) adds an interesting note. Judith shares information I didn’t realize about the boat that Pavel/Paul Kraus (AATW Chapter 7) took from China to USA in 1941.

It has been a while, but I enjoyed your book very much… I would still love to have a note that I could put into the book. I think it makes the book all the more special.

On page 220, you spoke about Pavel leaving on the Conte Verde from Genoa Italy for Shanghai. If I am not mistaken, that was the last ship that managed to get people to safety. My Parents were among the passengers on that ship. The ship that left after the Conte Verde ended up going back to England. The movie (The Voyage Of the Dammed) was the story of this trip. Later on the Conte Verde was scuttled in the Shanghai harbour, it was razed and the sunk a second time. I don’t know if these facts are known to you.

Last Boat From China Background:  In 1940/41, Pavel Kraus’s brother Frank worked with Frederick Willkie at Joseph E. Seagram & Sons in Baltimore. Frederick was the brother of Wendell Willkie, 1940 Republican candidate who ran against FDR. Cutting through red tape that had engulfed Pavel, blocking him a Shanghai departure, Frederick literally allowed for Pavel to catch ‘the last boat from China’.  At least the last one out that made it through troubled waters so people survived.

If Pavel had been forced to stay behind in Shanghai, after the US declared war on the Japanese at the end of 1941, he would have been interned by the Japanese. Considered stateless refugees, the remaining Jews in Shanghai in 1943 were confined by the Japanese to Hongkou “Ghetto”.  Sixteen thousand people lived in an area of less than two sq. Kilometers (0.77 square mile). The living conditions were horendous.

Fortunate Pavel became a US GI during WWII – part of the Army division that liberated Dachau Concentration Camp and first on arrival at war-end at Hitler’s Mountain retreat, Eagle’s Nest. His claim-to-fame move was recognizing Nazi Otto Skorzeny when Skorzeny was POW of US in Austria just after the war. Best known for his rescue mission for Hitler of Mussolini, Skorzeny also disguised German soldiers in US uniforms causing havoc during the Battle of the Bulge. When Pavel met him as POW, Skorzeny was using fake ID papers. But Pavel recognized him and led to interviews still existing on YouTube today.  Paul Kraus died in Chicago in September 2014 at 95 (for more information see: http://bit.ly/1yBa5Hv