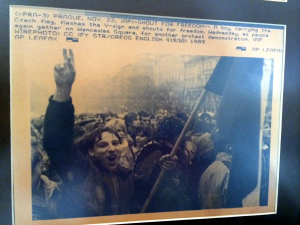 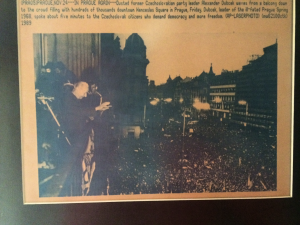 A memory from the Velvet Revolution – Twenty-Five years ago – Czechoslovakia, November, 1989

I have a memory that embodies the emotions I felt when my dad’s native land, Czechoslovakia, recovered their freedom. After forty-one years of communist rule, in what is now known as the “Velvet Revolution,” a brave country shouted for freedom and would not be denied.

The TV news broadcasts in late November 1989 weren’t constant like they are today. To know what stories were breaking worldwide, you had to wait patiently until the evening reports. For weeks, my dad followed anything and everything that was about his countrymen sitting on the cusp of regaining freedom.

As I lived over an hour away from my parents’ Indialantic, Florida home, my father and I spoke often by telephone during those weeks speculating what might happen next. His voice filled with excitement and apprehension as the world looked on. His similar hopes for freedom had been dashed some twenty years earlier when his remaining Czech family and friends thought the communists were easing their tight hold. Back then, he’d eventually watched television images of Soviet tanks filling Prague’s streets.

But in the fall of 1989 he assured me, “This is different. There is a chance.” My dad had the right to speculate. He’d been forced in to being a stateless citizen in 1939 when the Nazis occupied his homeland and the Czechs lost their democratic state.  He first found safe harbor in China before making his way to the USA.  I know now following WWII that my parents in 1947 considered a move from America with their young family to Czechoslovakia. Dad wrote a letter to his Aunt Valla saying he wanted to return and practice medicine. She tried to dissuade him. She told him things weren’t the same as before WWII. “You will do better to remain in the U.S.”   I still think had the communist party not taken over the Czechoslovak government in early 1948, my parents would have moved there. Perhaps there never would have been a ‘me’. I was born in Florida in December 1948 after Dad and Mom decided to stay free in America.

So as the Velvet Revolution unfolded in 1989, I stayed glued to television reports. My heart was in my throat, hoping on Dad’s next visit to his homeland he would find his relatives living in freedom, in a country returned to democracy!   When the moment arrived with over 200,000 people celebrating in Prague’s Wenceslas Square, I was won over by the humanity of the people. I marched down to the Orlando Sentinel’s newspaper office and asked if I could purchase news photos from Prague.

Over the next few days I kept returning. Each time the Sentinel made good on their offer to share powerful Associated Press wire photos hot off the press. Every AP photo grabbed my attention. One was titled “Shout for Freedom.” The long cold war had ended with little bloodshed. Days later, I had the pictures framed and gave them to my dad with a plaque that simply reads “Freedom.” As if it were yesterday, I remember the moment I handed it to him. I recall my dad’s slow forming smile and his voice cracking as he simply said, “Why do some images reach inside us?”