How can we make peace in our world? One hopeful idea.

How can we make peace in our world?  If we look to our past, there is one simple way for our shared humanity.

As if foreordained, the Holocaust Remembrance Day of April 28, 2014 mirrors the time in which my paternal Czech grandparents, Arnost and Olga Holzer, began their journey to meet their fate some 72 years ago.

At the time in March 1939 of Nazi occupation of Czechoslovakia, Arnost was 53. A WWI veteran, he thought he’d seen the worst of war.  He had not.  Olga, 51 had, along with Arnost, loved and nurtured their only child, my dad, Oswald “Valdik” Holzer, so he could accomplish his dream of becoming a doctor. He did so in 1937; then joined the Czechoslovak Army. When the Nazis invaded his homeland, Valdik escaped back to Prague. There, he gathered his required emigration paperwork and traveled 8,000 miles to Shanghai, China seeking safe refuge.  His parents chose to stay behind.

April 24, 1942: Nazi records show my Jewish grandparents’ forced train trip on Transport Am on April 24, 1942 from Prague to Terezin (Theresienstadt) concentration camp in northeast Bohemia.  One month later on May 25, 1942 on transport Az, Arnost and Olga were sent to Lublin, Poland. No known document shows their final destination.

Arnost was 56, Olga 54. Experts have told me, because of their age, it is unlikely they would have been placed in forced labor. Expert review of train records from Lublin indicates they may have been among a group of Czechs from Bohemia and Moravia sent to Sobibor Death Camp. If sent there, they likely would have died in late May 1942 in this hellish place in eastern Poland. They may have been killed in a gas chamber or perhaps from a rifle shot in a field, as many there met their fate.

The image of these gentle souls meeting their fate in this manner haunts me like nothing else I’ve encountered in my admittedly soft life. Six years ago when I began my journey to understand my Czech-American father’s lost past, I understood little about what motivated the people who carried out the Holocaust.  I now understand even less of this inconceivable deed brought about by what appeared beforehand to be a civil society.  I only know around 11 million people – 6 million Jews and 5 million others the Nazis deemed undesirable for our earth – lost their lives in the most heinous manner. Two were my grandparents; forty-two other relatives met the same fate. My father did not reveal the full number until I was forty-four years old.

My father’s secret collection of WWII-era letters has allowed me to reconstruct the aspects of my grandparents’ daily lives.  Their words shape and sustain the memory of who they were.  They reveal tremendous affection for their only child. They show great humor and sometimes use words that as I read them, broke my heart as I knew what would happen to them. They describe a series of changes in their lives brought about by Nazi proclamations that took away their human rights and dignity and isolated them from others. They never complained to my father.  And he never told them how  difficult his life had become in China, with Chinese civil war and Japanese bloody battles, death-threatening diseases, loneliness, and despair.  My grandparents were descent people who saw the best in humanity, even to the very end of life.

My father stood in the doorway to the Holocaust, not inside.  As a displaced person from his homeland, he sought safe refuge through five continents. It was how he survived. I now fully understand one sad secret piece of the puzzle from his lost past. My dad buried deeply within his own survival guilt.  And yet, in the midst of this darkness that engulfed so many people, my father went on to lead an inspirational life. His life as a physician caring compassionately for a multitude of patients at no charge reflects the way his own father saw life.

In Arnost’s last letter to his son, as he wrote what he thought was his final good-bye on April 21, 1942, he made that wish for my father – that my dad use his profession of curing not to just garner wealth but to take care of the suffering humanity.

As I work to uncover my father’s long lost past and what it means for humanity, this “wish” from Arnost has uplifted my spirit.

We share a common humanity.  If we want to make peace, we must take care of one another.  It’s just that simple. 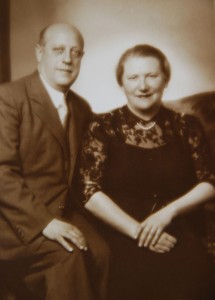