Recently, I was a guest author at a local book club. The 13 attendees all had read Adventurers Against Their Will and came with questions and compliments that once again reminded me why I’m doing what I’m doing in this second chapter of my life.

Clearly resonating with readers is the humanizing of history through the letter excerpts of my dad’s Czech friends and relatives who lived through incredible Nazi-caused life-changing events. The real Adventurers of my book were the “lucky ones.”  They survived and rebuilt their lives after WWII. My dad with my mom chose to do that in America. The details that spill from the old letters – hopes, fears, comfort and advice that they shared with my dad – are as relevant today as they were seventy years ago.

At the end of the book club session, one attendee said: “I came to care deeply about these people through reading their own words. Thank you for reminding me what matters in life.”

As I think of Memorial Day and remember those Americans who have given so much across the world so that we Americans and millions of others can enjoy freedom, I think of my father and his immense pride from becoming an American citizen in 1944. My dad knew what it was like to be persecuted, to proclaimed as ‘undesirable,’ and to lose your freedom and native land.

From the Congressional Record, 1941, Vol. 87, Pt. 1 – President Franklin D. Roosevelt described well what I believe my father sought in his dream of coming to America: 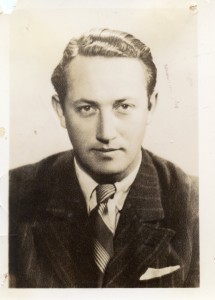 “In the future days, which we seek to make secure, we look forward to a world founded upon four essential human freedoms.

The first is freedom of speech and expression — everywhere in the world.

The second is freedom of every person to worship God in his own way — everywhere in the world.

The third is freedom from want — which, translated into world terms, means economic understandings which will secure to every nation a healthy peacetime life for its inhabitants — everywhere in the world.

The fourth is freedom from fear — which, translated into world terms, means a world-wide reduction of armaments to such a point and in such a thorough fashion that no nation will be in a position to commit an act of physical aggression against any neighbor– anywhere in the world.

That is no vision of a distant millennium. It is a definite basis for a kind of world attainable in our own time and generation. That kind of world is the very antithesis of the so-called new order of tyranny which the dictators seek to create with the crash of a bomb.

To that new order we oppose the greater conception — the moral order. A good society is able to face schemes of world domination and foreign revolutions alike without fear.

Since the beginning of our American history, we have been engaged in change — in a perpetual peaceful revolution — a revolution which goes on steadily, quietly adjusting itself to changing conditions — without the concentration camp or the quick-lime in the ditch. The world order which we seek is the cooperation of free countries, working together in a friendly, civilized society.

This nation has placed its destiny in the hands and heads and hearts of its millions of free men and women; and its faith in freedom under the guidance of God. Freedom means the supremacy of human rights everywhere. Our support goes to those who struggle to gain those rights or keep them. Our strength is our unity of purpose.

To that high concept there can be no end save victory.”