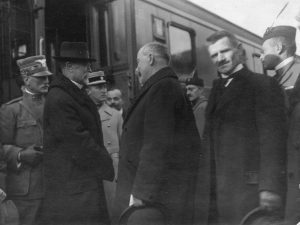 https://youtu.be/MZgf8l56tQg  In this video from 1918, at about 8:10 minutes, the Mayor of Benesov, my dad’s Czech hometown, greets Tomas M. Masaryk returning from exile during WWI to become the president of the newly former Czechoslovakia. At the time my dad was six years old. My father’s aunt Valda was married to Jaroslav Marik, the son of the Mayor.  In the 1960s, when my father was visiting Czechoslovakia, Uncle Jaroslav, knowing my dad collected hats, gave him the top hat that Mayor Marik wore on that day.  After my father’s death in 2000, I chose the hat as part of my inheritance as I knew what it meant to my father. I intend someday to return the hat to the Marik family, a family I’ve gotten to know well through my writing journey and multiple family reunions, hosted at great Aunt Valda and Uncle Jaroslav’s Neveklov home, passed down in their family to their grandsons.