Adolf Hoffmeister’s original poster of Hitler was discovered in 2000 in Florida by Joanie Holzer Schirm in the belongings of her Czech-American father Oswald “Valdik” Holzer after his death. The red and black, 17” x 24” poster, drawn circa 1940 before the United States entered World War II, features Adolf Hitler with his arms raised and the slogan “Wanted in Prague.” Printed for the Czechoslovak Information Service by the U.S Government, the poster was distributed to the Czech population in America and in exile in Great Britain.  The avant-garde artist Hoffmeister, 8 years older than Holzer, drew caricatures at the same time in the late 1930s at Mánes Exhibition Hall in Prague.

The rare original poster by the famous Czechoslovak artist was returned to Prague in September 2018 by Joanie Holzer Schirm to the Millennium Galerie, owned by Adolf’s son, Adam Hoffmeister.  Joanie was In Prague in conjunction with the Czech National Trust exhibit titled “Ticket to the New World” which featured life stories about both men among sixteen others who sought safe haven in America after Nazi occupation of their homeland. Prior to the Nazis arrival, in addition to his work as an artist, poet, and novelist,  Hoffmeister had edited one of the main Czech daily newspapers, Lidové noviny, and the main literary paper, Literární noviny.  As an immigrant and passionate anti-Fascist, Hoffmeister took up refuge in New York City. His art was part of the first exhibition of Czech art at New York’s Museum of Modern Art in the height of World War II in May 1943, titled ‘War Caricatures.’

At the return of the original piece, valued by Getty Images at $500, Adam’s daughter Jessika Hoffmeister translated the emotional setting with her father Adam as the Hoffmeister family received the gift of the original poster Adam had never seen before. The “Hitler—Wanted in Prague” poster now hangs in Adolf’s son’s fine art gallery in the Malá Strana area. 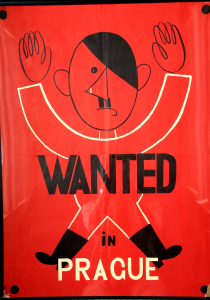