Why I Write Nonfiction – Real Life Stories of Connection

As I reach my ninth anniversary of the still-feeling-new chapter of my life as an author, once again I receive a reminder of why I love what I do.  From the books I write, I find myself a connector of people who are tied in myriad ways to my main character, Oswald “Valdik” Holzer—my dad.  My first book, Adventurers Against Their Will, features many of his Czech friends and family in a story about searching for the past so one can understand the present.   The experience of discovery, research and writing have been a gift like none other after a thirty-five-year professional career in the business of engineering.

And the gifts continue; dribbling in through emails to my author account, or from Facebook, or LinkedIn.  Here’s a recent example which I cherish because I can be of help to this email writer. I can connect her with several of the ‘sources’ I found as I went in search across the globe for some of the writers of my dad’s secret WWII letter collection.  Along my writing journey, the people I meet also teach me from what they know. I love the chance to keep learning.

Although my father spent the greatest number of years living in the United States, he never forgot that he was born in Bohemia. He was Czech and American and bestriding the best of both. For nine years, I’ve studied both cultures and now acknowledge the virtues of each. It lies in the people’s hearts and experiences and how they rise to the occasion to overcome difficulties and injustice.  Here’s a note that relays both. For those who’ve read Adventurers, you will learn more also.

As a 1949 post putsch refugee from Communist Czechoslovakia, I am interested in all things Czech. Of particular interest to me is the era that drove my parents from their beloved home and wonderful life in Mlada Boleslav to various refugee camps including a former Panzer Caserne in West Germany, then onto West Pakistan where they served in the newly formed Medical Corps of the Pakistani Army, and, ultimately, to Flushing New York. There my grandmother, Marie Provaznikova, first President of the Women’s Olympic Committee and first defector in search of freedom during the 1948 Olympic Games in London, awaited them. She, too, worked for Radio Free Europe and Voice of America upon landing in NY, as did your father’s friend Karel S.

Our story, too, with an escape through the woods of Sumava, is a riveting one.

I loved reading your book aloud to my family while driving to a Christmas celebration on Sunday. As I read to my daughter, I commented on things to which I strongly related. I mentioned that the name Schoenbaum seemed familiar, but I could not place it. We finished two chapters and arrived at our destination.

Last night I picked it up again.

Imagine my delight and surprise when I got to the Dramatis Personae of Chapter 3 and came to brother “Franta”, then Anka Neuman, followed by Vera and Jarmila. Kamil sealed the deal. These were dear family friends in Schenectady, NY with whom we had lost touch over the years. We did see them off on their move to Florida. As I write, I look at a large armoire brought from Czechoslovakia in the 30’s and purchased from them at their departure “garage sale.” There is also a Benda nude, a small sterling plate among other things purchased. Kamil was my sometimes naughty family physician, the Newmans danced at my wedding, my mother and I shopped with Anka for “rags” ( hadry) at a local discount quality clothing store, my mother also was at Kamil’s bedside when he died; we did stay with the Schoenbaum’s in Mexico City when on vacation there in the early 60’s, and Franta…that is another story! I have at least a dozen paintings my father purchased from him once my parents started returning annually to their beloved home land in the mid to late 60’s. Some of the paintings were shown at the Manes Gallery. And, yes, Franta did visit our home in Altamont, NY, and hit on me, a naive 27 year old, as I traveled to Beirut via Prague in 1971 on my way to teaching at the American Community School. When we knew him, he was called Franta Seba. I am certain that he is the same person in the letters: rude, vulgar, funny, affectionate, loveable…a tragic figure in so many ways.

Is Jerry ( Jarmila) still alive? Would you be kind enough to send contact information if she is? I did google Vera some time ago and learned that she was no longer with us. 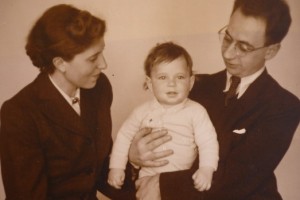 Also, did you come across anything in your research regarding Franta’s art dealing career? Please let me know if there is any info that is to be found on this area.

One more thing: I have been fully bilingual since the age of 7. Here are some words that are perplexing in translation:

I assume that “ass” is “prdel”. But “prdel” is so much stronger and more powerful and vulgar than “ass.” In some ways it is almost untranslatable. I think “asshole” might have more of an impact. A “prdel” is, in fact, an anus.

“Ty vole” literally means, “you bull.” Typically, however, it has nothing to do with things bovine or studly, but is an affectionate insult that would translate to “you idiot.” When someone is called a “vul,” it means that the person is stupid or an idiot, maybe even an asshole. It is no manly compliment.

Thank you so much for writing this incredible memoir. I cannot wait to finish it and will more than likely reread it often.

It would be fun to speak with or even meet you if you ever are in the Northeast. Let me know if you are ever near Northampton, Massachusetts or Altamont, NY.

As to the Newman home/office on Crane Street in Schenectady, it is now a halfway house for drug rehabilitation.