Walt Disney’s Birthday – Thanks Walt for Inspiring us to Dream

If there is one person I can think of who best represents making dreams come true, it is Walt Disney.  While I grew up in Florida, Walt was my inspiration for achieving big goals in life through dreaming and doing.

As an adult, the most pride I’ve felt while receiving an award was when I received the 1992 Walt Disney Company’s Dreamers and Doers Award. It was presented in recognition of my leadership role of a band of Central Florida community volunteers who successfully proposed on behalf of Orlando, Florida to become a venue for FIFA’s 1994 World Cup.   It was a magical endeavor working with many great people who gave their heart and soul to the effort.  I got a lot of credit but the success surely belongs to the masses who worked on the bid effort. They were all “dreamers and doers.”  The 20th anniversary for World Cup Orlando will be in the summer of 2014.

And for a Disney-like ending to the story that unfolded 20 years ago, after the five matches were played in Orlando’s Citrus Bowl, Orlando was proclaimed by the Atlanta Constitution “the best venue in the best World Cup ever.”

Now as an author, I value many friendships I gained from that endeavor.  As my books unfold to the world, it is customary to gather testimonials.

Here’s a special one related to Walt’s world:

“I first came in contact with Joanie Schirm in 1991 when we worked together to bring the World Cup games to Orlando. It was no small feat.  Quickly I knew she reflected perfectly what Walt Disney called the Four C’s: curiosity, confidence, courage, and constancy. I had no idea she would later use all these “C’s” so productively again to deliver the story of a lifetime – her father’s – in the book My Dear Boy, the companion book to Adventurers Against Their Will. I predict it will someday make a fine movie. As a 1992 recipient of the prestigious Walt Disney World Dreamers and Doers Award, I know this strawberry blond force of nature will turn the book in to a best seller.”-Richard Nunis, Past Chairman, Walt Disney Parks and Resorts 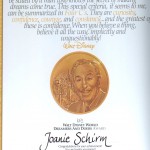 Filed under: Stories from the Writing Journey
← Previous Next →