Things that are tough are what you remember.

Things that are tough are what you remember.

I was brought up on the view that if you wait patiently until the end of the story, the good people will live happily ever after. As a 1960’s child, “Treat others with respect and make the world better wherever you go” paraphrases the example of how my parents lived their lives. I figured as a “good person,” happiness would just happen to me.  I didn’t realize that it was possible for happiness to be a choice.

In 1993, I drove from Orlando to visit my parents, Oswald and Ruth Alice Holzer, still residing in my childhood stomping grounds of Indialantic-By-The-Sea. By then I was forty-four and had grown curious about my heritage. The fan fair surrounding Steven Spielberg’s new film, Schindler’s List, made me think I could get my dad to speak more about his Czech parents. I knew his parents and grandmother perished in the Holocaust but had little information beyond that as my dad rarely spoke about them.

In the movie, the real life central character Oskar Schindler was an ethnic German born in what is now the Czech Republic. My father was also born in the Czech land just three years after Schindler. Schindler had worked as a German spy in Czechoslovakia and was arrested in 1938 for espionage. He was released under the terms of the Munich Agreement in 1939. My father served in the Czechoslovak Army at that same time. He was part of the soldier-team assigned to oversee the turnover of the Sudetenland to the Germans, also dictated by the Munich Agreement. The movie’s story followed that tumultuous period of Czech history.

I also knew from the previews that Schindler was a Nazi businessman during WWII who’d ended up saving 1200 of his Jewish workers during the Holocaust. I thought my father would find the movie interesting but realize now my idea to see the movie together was not a well thought-out idea. Had he gone with me, we would have watched onscreen gruesome scenes of concentration camps and vicious Nazis arbitrarily shooting people that looked just like my father’s close relatives.

Mercifully, my father gave me a resounding “no” to my movie invitation. But what happened next became a pivotal moment in my life.  In the quiet of their home overlooking the Atlantic Ocean, that night my father sat down with his old Voss typewriter. With me at his side, Dad typed out a list of the forty-four relatives he knew had perished in the Holocaust.  Never had my brother, sister, or I imagined the extent of our father’s loss.  As the names filled the page, suddenly these people existed for me – my flesh and blood relatives I’d never gotten to meet. When completed, I called his effort “Valdik’s List.”  This was the childhood Czech name that all these relatives had referred to him by.

It was one of the toughest moments of my life as I learned the truth from that period of his life. The memory is forever crystalized in my mind as my father, tears welling in his eyes, silently typed his list. It was also one of the most important moments in my life. I realized that my father made a choice. He chose not to burden his children with his pain until we were ready in life to accept it.  That night I was ready. The curtain rose on my desire to know what happened to all these people and put meaning to their lives. 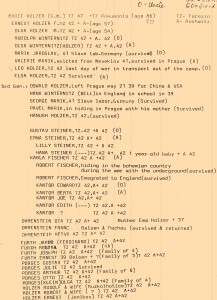