“Man who nabbed most dangerous man in Europe dies” … 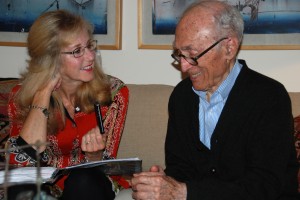 Imagine meeting someone through their seventy year-old letters – not addressed to you but to your father- who by the time you read the letters had passed away.  Through the letter writer’s own intimate 1940’s words, you meet this person as a young man; a refugee from Nazi-occupied Prague in Shanghai, China. You learn just a small slice of his life story and you yearn to know more.

Now imagine that this man becomes your friend, your confidante, sharing stories after seven decades. He speaks to you as if you are his peer because you, through the old letters your dad saved, know his friends as well as this letter writer did long ago, during the worst moments of his life. You learn this man nabbed the “most dangerous man in Europe” after WWII ended.

This surreal experience happened to me in 2010, when I found the man I knew as Pavel Kraus. Pavel, later in America known as “Paul”, was my dad’s cousin-by-marriage.  My dad’s Uncle Rudolf Winternitz’s sister was Paul’s mother. In 1944, Paul’s mother and father and Rudolf and wife Olga died in Auschwitz.  My father’s parents perished in 1942 at Sobibor death camp.  In 2010, I was on a journey of putting all these pieces of family history together when I found Paul.

My Czech-American dad, Oswald Holzer, hid four-hundred WWII-era letters away when the war ended.  They stayed hidden until he died.  After they were found, I had them translated and went in search of seven of the seventy-eight writers.   I located Paul in Chicago and we met at his apartment just after his 91st birthday.

At that meeting, as Paul shared details of his life over the seventy years that passed since he wrote to my dad, Paul became my friend.  We sat on his couch, laughing and crying as we looked at old photos and documents.  There on a hot summer day, Paul and I talked as buddies from the old days. I discovered he had much to share, including some stories his adult children knew little about.  Soon after our meeting, when he captured my heart, Paul became a featured character in my book, Adventurers Against Their Will.

Paul Kraus led an extraordinary life – as a European Jewish refugee, later as a brave US Soldier, a high ranking executive in the bourbon industry, and a father of three children.  He also was simply a man who, against all odds, lived life to its fullest until almost the day he died at 95 years old – September 22, 2014.  The Chicago Sun-Times article summarizes much that defined this extraordinary life.  I will miss my friend, Paul Kraus.