I’m one of the lucky ones. 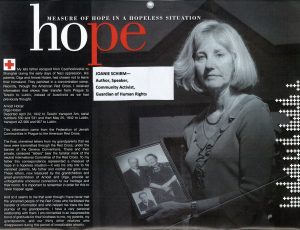 Solving a mystery from the past for the Holzer Family

It is often said that digging into family history can transform us.  Findings have the power to alter who we are. I’m one of those lucky people.

Two decades ago, after my parent’s deaths in January 2000, I chose as my inheritance a secret collection of World War II letters, documents, vintage photographs, and film, personal artwork, and more. My Czech-American father hid them away after World War II, and by the time of their unearthing, they’d lived in two Chinese lacquer boxes for some fifty-five years, mostly in Florida. The contents changed my life.

A decade following the discovery, my life journey veered away from a life in the business of engineering through the willingness of a few business partners to acquire my company ownership share. This liberation allowed me to loosen the knots in my shoulders as I took on the journey of a lifetime into my richly cultural Judeo-Christian heritage.

In the beginning, I had no idea where I was going. The search for connective threads within the fragile onion-skinned 1930s and 40s letters written by over seventy of my dad’s friends and relatives led me to an understanding of a tumultuous past of which I knew little—voicing proud, lukewarm and secret Jewish heritage as the threat against their lives heightened. Refugee lives. Lost homelands. Family and friends, just as their young lives were blossoming. The men and women I met through their written words sharing epic tragic and triumphant adventures that reshaped the course of their lives changed mine.

Around a third of the writers survived WWII. Most of those who lived to tell their tale had already passed on by the time I read their letters. A few I was able to meet, hearing heartbreaking and miraculous tales of escape and rebuilt lives. Some of my questions were answered by descendants in four continents, themselves learning more than they’d known before reading the letters.  All encounters profoundly changed my 360 viewpoints.

Now, I look back and better understand what happened leading up to and during the war that followed the war to end all wars. I recognize the story’s relevance for today. I hear the echoes from European democracies that slowly, then quickly disappeared, taken over by autocrats. Democracies let down by the silence of those who stood by watching. I hear today the same words from strongmen telling lies, creating fear of the “other.” Attacks on free media, using scapegoats and untruths to further the strongman’s cause. I witness long-standing social injustices that spread across the land with little outcry against the facilitators. Widespread hate-filled prejudices, much like we see today worldwide, led to forced displacement and atrocities we now know as the Holocaust.

Amid the darkness, the one candle that lit up my writing room were the revelations of hope from those who survived and rebuilt lives throughout the world. Although not physically at my weary side as I blossomed as an author, my father, Dr. Oswald “Valdik” Holzer showed me the way—inspiring me to speak up. Share his story. Be a speaker in classrooms or virtually present, and at functions where related topics can be shared and planned actions explored.

Over the decade of global research and discoveries, my two nonfiction books emerged—honoring all who struggle in exile. Adventurers Against Their Will and My Dear Boy now help readers, high school and college students gain through vivid personal narrative and primary sources the reality of what led to the loss of democracy. They learn of heinous acts of violence, and the surge in refugees that scattered across the world looking for places of refuge.

Together, I hope we learn from our past and better protect the future by serving as champions for human rights. We must not only care; we must care enough to act. Joanie Holzer Schirm www.joanieschirm.com    joanie@joanieschirm.com

With that shared goal in mind, please consider a free partnership with Echoes & Reflections and nonfiction author Joanie Schirm and your school or organization to deliver an online professional development program on the experiences of refugees during WWII and the Holocaust and forced displacement today. For more information and to schedule a free program, please contact Jesse Tannetta, jtannetta@adl.org

In the Echoes & Reflections professional development program, Connecting the Past with Today: Jewish Refugees and the Holocaust, a facilitator models resources and classroom activities that focus on the history of Jewish refugees during the 1930s and 1940s. Educators learn to connect those lessons of intolerance, inaction, and indifference to how students understand today’s refugee and human rights crisis. The story of Valdik Holzer in My Dear Boy is a valuable resource when teaching about refugees during the Holocaust. For use in classrooms, the lesson plans incorporate compelling letter excerpts from her father and his refugee friends and family, enhanced with relevant modern-day web links on the topic.