A family tradition of saving the nation. Why truth matters and comes with a duty to speak out.

As I continue to write a series of books about my Czech father’s adventures during WWII during his forced displacement by the Nazis, I marvel how world history ebbs and flows with the same uncomfortable flare-ups of hatred and discrimination. The unique WWII letter collection that my father hid away after the war, often provides a window into that history of woe.

In August 1940, an aunt who’d also managed to escape wrote from Camden, Maine to my refugee father living in the war-torn interior of China, about what she was facing:

“I can easily imagine how you feel and I would be really happy if you could get here as soon as possible. Not that the conditions here are much better. There are huge unemployment problems and strong anti-Semitic feelings. In the newspapers, you can read daily ads as: “Will only hire Aryan” etc., signs on some houses read: “Will rent a flat, to Aryans only.”   I am not afraid of anything, and curiously waiting how it all ends.  I don’t see a very bright future, though…”

In 2018, we see people exploiting the fear of ‘the other’ by spreading rumors and misinformation about the actual facts related to immigrants coming to America, legally or illegally.

The good news, if one cares to look for it, is truth now comes from the touch of a finger on a search engine. When you carefully seek reputable sources, often the best are from credible US government reports detailing many years of facts. This report from the Migration Policy Institute (MPI) issued February 8, 2018, is very helpful for understanding statistics on immigrants and immigration to the USA.  https://www.migrationpolicy.org/article/frequently-requested-statistics-immigrants-and-immigration-united-states#Numbers

As widely stated, we all have a family migration story. Even ‘native’ American Indians arrived here from somewhere beyond the lands of what is now America. Thus, we are all immigrants and therefore ‘the other.’ Even before there was the United States, my mother’s lineage on her paternal side arrived in New Amsterdam (now New York City) in 1658 on the ship de Bruynvis (Brownfish). A later direct descendent during the Revolutionary war was the brave patriot Captain Daniel Bray. Bray was assigned the task of gathering the boats for the difficult task of General George Washington’s famous Delaware River crossing on Christmas night, 1776.  Since then, we’ve had a family tradition of saving the nation.

On my dad’s side, I’m the first generation. A distinction I have solely because my dad managed to escape the deadly wrath of the Nazis. Eventually, Dad settled in the United States of America in sunny Florida, his pride in becoming a naturalized citizen always recalled with high emotion and appreciation.

Today’s unwarranted fear mongering about migrants undermines our nation’s solidarity from within and attacks the entire fabric which has made our country the envy of the world, until maybe now. The constant attacks serve no purpose but to erode our promise for future generations.

So this brings me back to our family tradition of saving the nation.  Join me. Speak up for the value of immigrants in American life. Sure our country should always strive to make our modern immigration system work more efficiently as we strive to be a compassionate and just country of opportunity for those lucky enough to call it home.

Sign up for news alerts on www.joanieschirm.com about my forthcoming book: 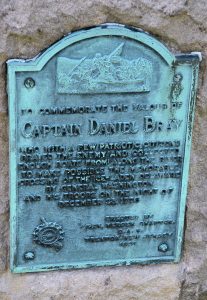 Revolutionary war patriot who gathered the boats for General George Washington to cross the Delaware, Dec. 1776