Help Build Confidence in a Writer

What does a Shuttle astronaut, an honorary Brevard County Historian, the wife of a Florida former poet laureate and Joanie Holzer Schirm have in common?  Nothing that I, Joanie, can figure out until February 20, 2015 comes around.  That’s when we, along with some other illustrious authors will read from our books or poems at a Florida Institute of Technology hosted evening event at Evans Library in Melbourne, Florida.

Normally, the life of a writer is a solitary one. At least for me it is as I need total silence to place my words correctly on the computer screen that later produces the word doc that turns into my books.  I’m not one of those writers who has a jazz playing in the background or allows my husband to spend much time in my writing room. I need peace and quiet.

But when an occasion comes up with a willing audience on hand for me to read aloud what I wrote while in hibernation, it feels darn good.  Why? Because as a writer I suffer constant self-doubt. This style event becomes an indicator that someone cares about my work or some tiny piece of it. Just the invitation proves the work must be acceptable beyond the four corners of my writing room. Right?

FIT is a special place for me…it’s where my father, Oswald A. Holzer, MD donated ten years of his life as the Campus Doctor after he retired from his private medical practice.  He built the Student Health program from scratch, donated his salary and time, and then, to top it off;  he and my Mom, Ruth Alice Lequear Holzer established the Holzer-Lequear Endowment for FIT to help students gain their education. It is only fitting that on February 20th  I would speak about the star of my books – my dad. I’ll provide a tiny bit about the backstory of his life before FIT from some readings from my book, Adventurers Against Their Will.

So if you want to help build confidence in a writer (Andrew Aberdein, Ben Brotemarkle, Weona Cleveland, Marcia Denius, Joddy Murray, Winston Scott, Louise Skellings, Scott Tilley, and me), please share your time on February 20, 2015 – 6 – 9 pm at FIT’s Evans Library.  It’s free, and there will be refreshments. 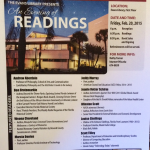