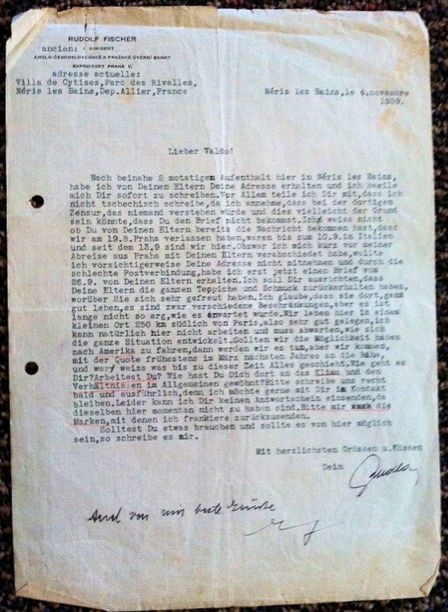 From the historic Holzer World War II Letter Collection of 400 letters written to and from my dad by 78 Czech writers from 1939 – 1946: a letter from someone who found refuge in Southern France before war broke out.

Letter from cousin Rudolf “Rudla” Fischer in 1939 after he, his wife Erna, and son Tom find refuge from Nazi-occupied Bohemia and Moravia (Czech lands) in Néris les Bains, France. Rudla is writing cousin Oswald “Valdik” Holzer (my dad) in Shanghai, China after he arrived in July 1939 from Prague:

After a nearly 2 month long stay here in Néris les Bains, I have obtained your address from your parents {Arnost and Olga Holzer in Prague} and am writing you immediately. I am not writing in Czech because I infer that with the present censorship {Japanese, Nazi sympathizers in China} no one will be able to understand it and this could be the basis that you would never receive this letter.  I don’t know if you have received the recent news from your parents that we left Prague on August 19, we were in Italy until September 10, and since September 13 we are here.

Although in my departure from Prague my goodbye with your parents was brief, I wanted to be careful not to take your address with me and with the poor postal service I just now obtained a letter from your parents dated September 26.   I should tell you that your parents had their carpets and jewelry returned to them, which pleased them a great deal.  I believe that they live quite well there although there are various restrictions but it is not as bad as anticipated.

We live here in a small town 250 km south of Paris also well situated. Of course I cannot work here and must wait to see how the whole situation develops.  If we have the opportunity to go to America, we will do it. But our quota will be met at the earliest next March and who knows what will happen between now and then.  How are you?  Are you working?  Have you gotten used to the climate and the circumstances there?  Please write soon and in detail because I would like to stay in touch with you.  Unfortunately, I cannot send you a reply coupon because you cannot get them here.  Please send me back the cancelled stamps.

If you need something and if it were possible to supply it from here, so write it to me.

With heartfelt greetings and kisses,