Adventurers Against Their Will finds my dad’s birthplace for a photo op!

Through the goodness of reader Petr Šraier, my book Adventurers Against Their Will has made it to my dad’s birthplace, Benesov, for a photo op that warms my heart!  As the star of the story is my father, Dr. Oswald “Valdik” Holzer, it seems fitting that the book should visit the place of his birth – see second floor right hand corner.  Thanks to Petr for making this dream come true!!! 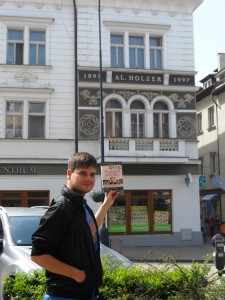