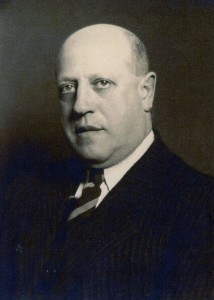 In the Czech language, Poslední přání translates to last wish.  Seventy-five years ago today, in Nazi-occupied Bohemia my Jewish grandfather Arnošt Holzer sat down at his desk in Prague and wrote his Poslední přání in a letter to my father. By then, my young physician Dad, Oswald “Valdik” Holzer had fled his native land in 1939 and become a stateless refugee in China. By 1942, he’d made his way to America. Four months before the message was written, the US declared war on Germany, barring father and son from letter correspondence.

Having been ordered by the Germans to show up at a transport to take him and his wife to the Nazi ghetto at Terezin (Theresienstadt), Arnošt left the note with his sister Valerie for safe keeping. Not knowing if and when he would return, Arnošt asked her to keep the letter unless he did not return; at which time he wanted her to send it to his son.  Arnošt and my grandmother Olga never returned, likely perishing in the Holocaust one month later at Sobibor death camp.

By August 1945, having not heard from her brother in over three years, Valerie heard news coverage of what had happened in the many Nazi death camps. Suspecting Arnošt and Olga would not return, Valerie mailed the letter to my father. Dad was then working as a physician in Ecuador, at oil fields supporting the US war effort. The thought of my dad reading that soul-crushing letter addressed to ‘my dear boy,’ will forever haunt me with sadness.

Today, seventy-five years to the day my grandfather wrote the letter, after much research, I know the horrific details of what probably happened to my grandparents in their final days on earth.  I understand how their loss changed my father’s life. I also know Arnošt’s last wish, his Poslední přání, inspired my dad with timeless, universal words that should inspire us all:

You have always been a good boy, and we are proud of you.  I wish for you to find full satisfaction in your profession.  I also wish that your profession of curing doesn’t just become a source of wealth for you, but that you yourself become a benefactor to the suffering humanity.

Just as his loving father wished, my dad lived an extraordinary life of compassionate caring in his role as a physician, husband, father, citizen of the world, and loving son.

I never got the chance to know my paternal grandparents or forty-two other Czech relatives who perished because of pure hatred.  What I know is that good does triumph over evil, if and only if we human beings work together to ensure that outcome. Seventy-five years ago the world was in a very dark place. Today, amidst the many acts of kindness and good, there remain signs of continuing darkness. When we see it, we must shine the light on injustice and intolerance as we care for one another. Our world can be a more peaceful and loving place—if we all become a benefactor.