One of the great gifts of this most recent life chapter of nearly a decade is having the freedom to do just what I want. It sounds spoiled, and maybe it is, but I worked long and hard to come to this time of choice for what I do with my time. Conducting research about multiple subjects was always a passion of mine. I especially love WWII history and how what happened leading up to that catastrophe threads its way into what is happening in current affairs.

My ‘free’ time spent with family history research almost always uncovers some ‘a-ha’ moment.  About two years ago a man named James in Tennessee read my first book, Adventurers Against Their Will. While dabbling in his own family history, James discovered we shared a relative: Ferdinand William Breth.  For me, Ferdinand Breth lives eternally in my dad’s old WWII letter collection.  Known to my Bohemian father as “Uncle Bill,” Ferdinand Breth is for me a first cousin twice removed from the Czech lands of my paternal heritage. Or to paint a picture from my twisted tree:  Ferdinand’s mother Teresie was my great grandfather Alois’ sister.

Uncle Bill, a chemist, living in Pennsylvania in 1941, helped my dad both financially and emotionally when my father and mother arrived in America from China. Uncle Bill’s letters to my father during 1941, before the US entered World War II, were especially intriguing. They detail Uncle Bill’s contact with desperate Jewish relatives in the Czech lands and his attempts to pay monies to bring them to safety.  In all cases, he failed as the Nazis tightened their hold and began to deport them to concentration camps. Uncle Bill’s heartbreaking letters detail his suspicion that the Nazis were extorting the Jews of the money that U.S. relatives sent to facilitate escape. Sadly, none of the relatives Uncle Bill names in the letters were able to leave, and all perished in the Holocaust.

James’ niece Heather has the genealogy bug as I do and we’ve shared information. Over time, she and James have photocopied a meticulous diary kept by Uncle Bill. All entries involving people, places, photographs, or other noteworthy things are cross-referenced in ten-year indexes (Deciniums).  The document will be preserved by a museum in Baltimore.  Since several of the entries involved my father, James shared them with me including recently this one with a photo of my dad I’d never seen before from my parents’ time in California (1941-42). 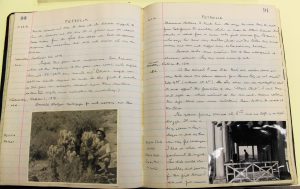